Croagh Patrick meaning Saint Patrick’s Stack or can also be referred to as the ‘Reek’. Is a mountain eight kilometers from Westport in Murrisk, Co Mayo on Ireland’s Atlantic Coast. The distinctively peaked mountain has reputedly been a site of pagan pilgrimage, since 3,000 B.C. It is now a Christian hike associated with Saint Patrick, Ireland’s patron saint. The bringer of Christianity to these shores and banisher of Snakes, supposedly! (For that good deed alone he deserves to be celebrated each and every year).

It is believed that a teenaged Patrick was abducted by Pirates and sold into slavery. Forced to work as a shepherd in the west of Ireland. For six years he toiled before managing to escaping and making his way back his home to the UK. Where he threw himself into the study of Christianity. Traveling to monasteries in England and France, eventually getting himself ordained as a priest. Acting upon a vision he had of receiving a letter

I read the heading: “The Voice of the Irish”. As I began the letter, I imagined in that moment that I heard the voice of those very people who were near the wood of Foclut, which is beside the western sea—and they cried out, as with one voice: “We appeal to you, holy servant boy, to come and walk among us.”

Patrick resolved to return to Ireland and spread the word of god. Which was very decent of him considering they had kidnapped and enslaved him in his youth.

It is said he fasted on the summit of the reek for forty days in the fifth century A.D. No doubt, enjoyed the beautiful view out over clew bay. As a result the last Sunday in July (Reek Sunday) became the traditional day to climb the Mountain. An estimated 40,000 people per year do so. A few brave souls even do it bare foot!.

Over the duration of producing the oil painting I had to change the composition and colour combinations a few time. I discovered that it was over populated and cluttered. As a result I ended up removed one of my figures in order to give the eye’s natural path clearer access to mountain. In order to give the remaining pilgrims more character i decided to contrast there clothes with the surrounding environment.

If St Patrick has taught us anything, it is that on the 17th of March we celebrate not just his legacy but all things Irish. We embrace our shared cultural heritage no matter what corner of the world we find ourselves in. That you don’t have to be born on the Emerald Island to be Irish or to enrich Irish society. Therefore all that you just require is a hard earned appreciation for the outdoors. Allied with a willingness to let bygones be bygones (unless your a snake, then you can feck right off)

Considering out current situation, If you are look for some related fun. like puzzles, spot the difference, word games, trivia or colouring pages. Download my FREE Activity book by signing up for my newsletter below. It’s totally FREE just download and print of the pages that interest you.

Happy St Patrick’s Day where every you are 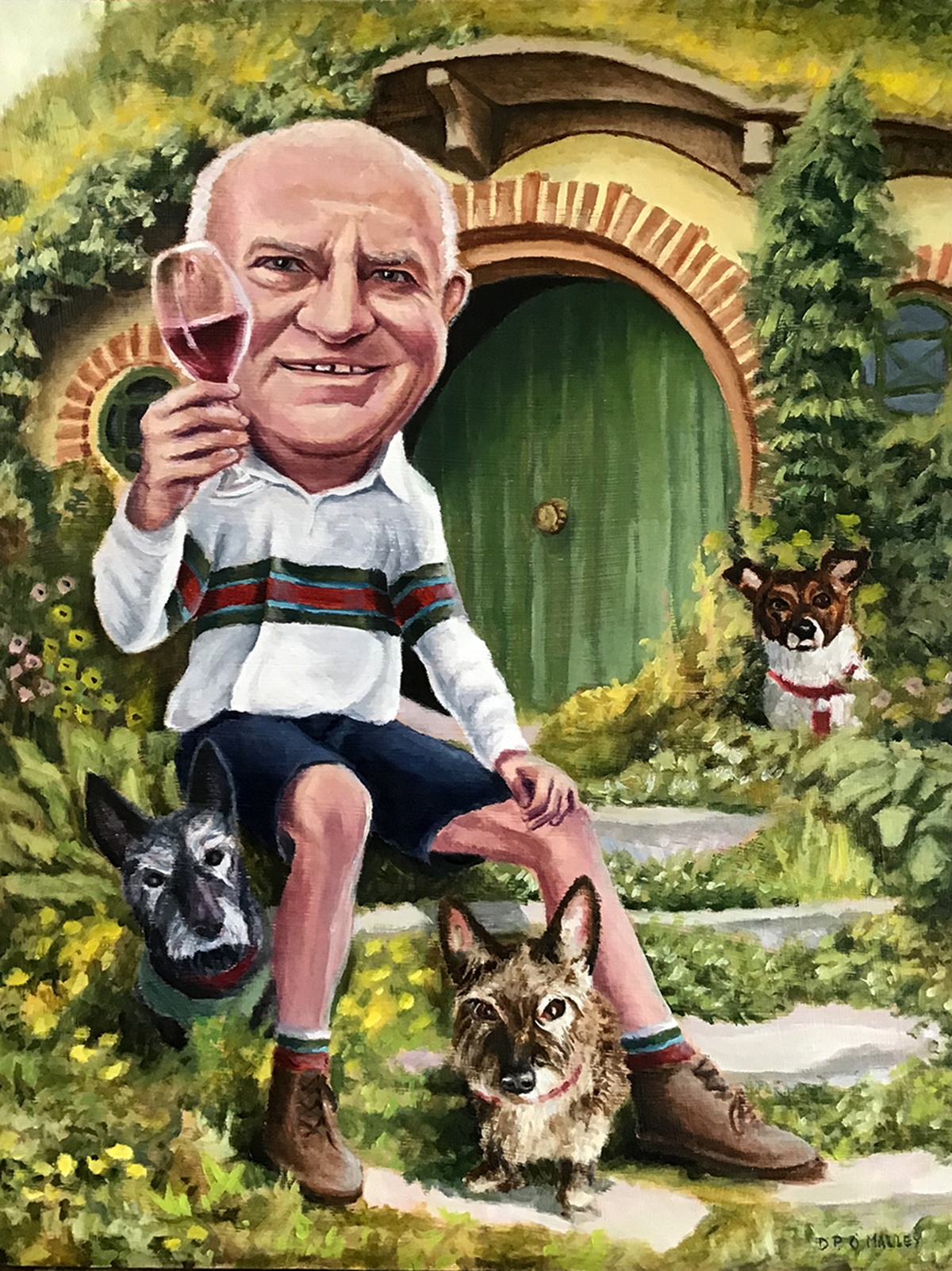 Being a fan of all things middle-earth, I was delighted to get the opportunity to create this unique Fun Art Portrait just before Christmas. It was to be a surprise a birthday gift with the brief of “having Nick sat with a hobbit house in back ground, in walking boots with a glass of red wine, wearing his rugby shirt.” To also include three Jack Russells somewhere in there as well. I set about sketching up the best composition and once we were all happy with the layout i got stuck into the Fun part of the process, Painting it.

My process is always one of building up the Painting in layers, starting with Blocking in the all colour areas. The biggest mistake i used to make was focusing on getting all the detail done in one section say a face only to discover my relational values were out of whack, usually far to bright as i was judging darkness section again the white or ochre stained canvas and not the blue sky or green foliage background that would be there in the finished painting.
Once you have the initial block in you then continually add layer of dark shadow section and bright highlighted sections, twerking where necessary until your happy with the work. You could keep on going, refining and layering for ever but i like to leave some of the brushwork evident, it gives the portrait it own character and texture. With Oil Paints you have to allow time for each layer to dry before working on top of it, i prefer to allow it dry for a week before adding the final Varnish. Once it has fully dried i package it up safely and pop it in the post so it can be send it off to it new home.

This was a fun commission for me to tackle, as it allowed me more creative freedom to try and include all the elements my client had asked for with the 30cm X 20cm confines of the mounted board. My first step was to come up with a layout that includes all the requested objects in a “workable narrative” as well as being compositional pleasing.  When i was happy I lightly drew the design onto the white primed board. Only to erase it, so as to leave the faintest trace of a line, which would act as guidelines. Then I started blocking in or under-painting, basically getting the foundation colour of each object down.

Once the board is cover with the first layer of paint, I usually leave it while for the oils to dry before repainting the scene again. This time adding shadow, highlights and some detail in order to balance the colour and give them a sense of depth, as can be seen by the addition of darker red areas to the car and highlighted stars of the galaxy

I then repeat this step again and again further refining the detail and depth of the paint until I’m happy with it. I really enjoyed painting the deep blues/blacks of space and the tint of pink in the galxy’s spiral arm, and the variation of skin tone between the two space men. I endeavor to get each painting to a certain representational standard but it is just as important not to obsure the brush work as i feel it gives it’s own character, At the end of the day it is an oil painting. You may notice that towards the end I swapped out my little green alien for a Cat,  the Client wished to have something more personal to him, which is what commissioned Fun Art portraits is all about.

Thank you for reading, please let know what you think by leaving a Comment, liking it or FaceBooking me. If you happen to find yourself outside on a nice clear night, why not look up at the Majesty of the stars and untold wonders of the void, you might even spot out friendly spacemen!

Until next we meet, be well,
D.P O’ Malley – cultural satirist and painter in oils.