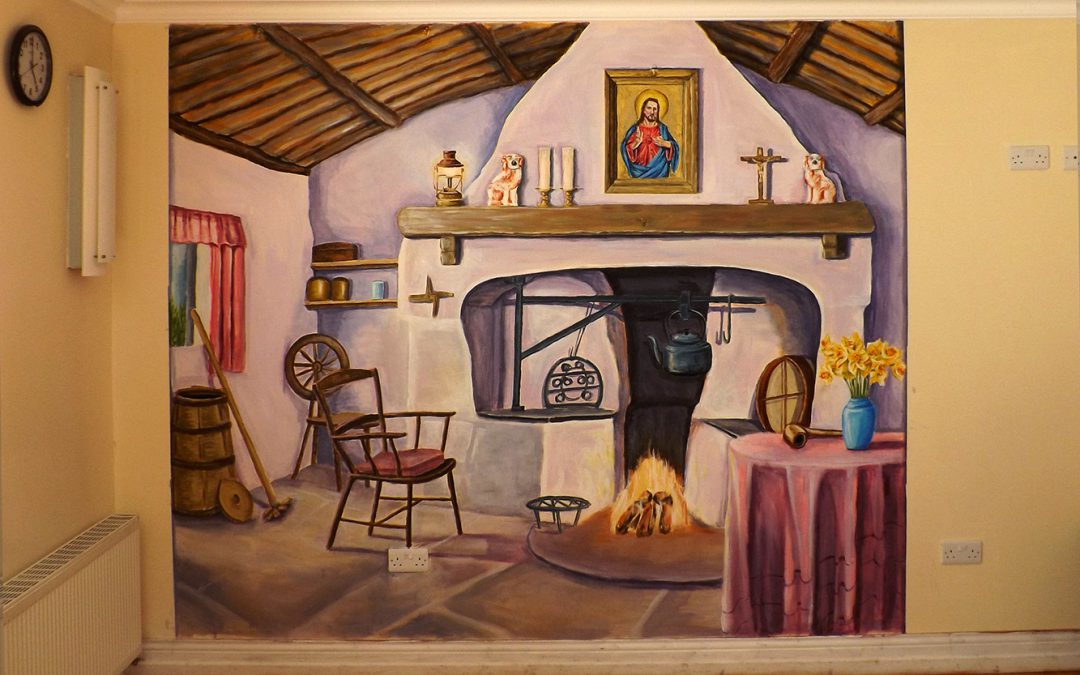 I’m reposting this blog from my old site in the vain hope of organizing all of my stuff properly!). A few years ago I was fortunate enough to be asked to do a few Murals (a painting executed directly on a wall) for the residences of brooklodge, Nursing home. The intent was to add some colour and familiarity to the walls for the residents. The themes were generally drawn from old rural Irish life. Such as this one in a communal room which i chose a setting of a typical cottage fireplace/kitchen found in most thatched cottages from before the 1960’s ish.

This was my largest mural yet measuring approximately 8ft X 9ft from floor to ceiling. I completed the it using acrylic and a range of brush sizes. starting as always by laying out my design light in pencil before blocking in the different objects loosely  in the  mid-tone of it’s main colour .

The objects were all Items common to a kitchen of the time, such as the sacred heart painting of Jesus Christ, a wooden crucifix,  A pair of Ceramic staffordshire dogs, a Tilley lamp, a spinning wheel,  and a butter churn to name but a few

It took a few days as i filled it in and tweaked the composition, building it up in washes/glazes to give each object its own blend of subtle colour. The final stage was working on the areas of shadow and highlight to give the image a pleasing sense of depth. I what to give the feeling you could sit in the chair and warm your feet beside the fire while waiting for the kettle to boil.

If your scouting for Ireland’s next top model, that’s me their doing my best model impersonation  to give you an idea of the size.

One of the murals was for the wall of the dinning room and it decided that an Irish dresser would best fit for the location.  Irish dressers were a common sight in many Kitchens of the past with the Irish Museum of country life describing them as “the most valued piece of domestic furniture in the Irish home, as it was the way in which the wealth and status of the household was displayed. The dresser gave the maximum storage space for the area it occupied, with storage for food, pots and butter making utensils. It was made from pine and was painted to give it a rich, attractive appearance”

I outlined the design on the wall to fill a space between two long vertical light and above a radiator. I began by blocking in the items, which included cups, plates, books, a teapot and a vase of flowers, after that it was simply a matter of adding depth by including shadow and highlights in three or four passes.

The second Mural was located in a residents room, I want to paint an image that was built around the interest of the occupant, which was a love of literature, in particular the English romantic classic of high social intrigue by authors like Jane Austen and Emily Bronte. I settled on a window motif overlooking a Landscaped garden, in  the style of the great English manor houses of that time period. I also included a woman enjoying the surrounding as she reads, and a inquisitive Owl looking back at the viewer. Owls were also a personal favourite of the room’s resident.

I kept a strong sense of perspective to give the mural a hint of the trompe l’oeil (which is art technique that uses realistic imagery to create the optical illusion that the depicted objects exist in three dimensions).

Like the other mural i began by blocking tin the major shapes in a mid tone, then added depth and definition by laying up shadow and highlights.  All the Murals were hand painted using Windsor and Newton Acrylic paints.
To receive a the most up to date info on all my painting, projects, and promotions ( i have a lot lined up!) join my Newsletter, not only is totally free but i give you a Free 17 page Activity E-book, full of trivia, puzzles and word-games , all inspired by Irish people and places -in exchange for the twenty seconds it will take you to sign up.