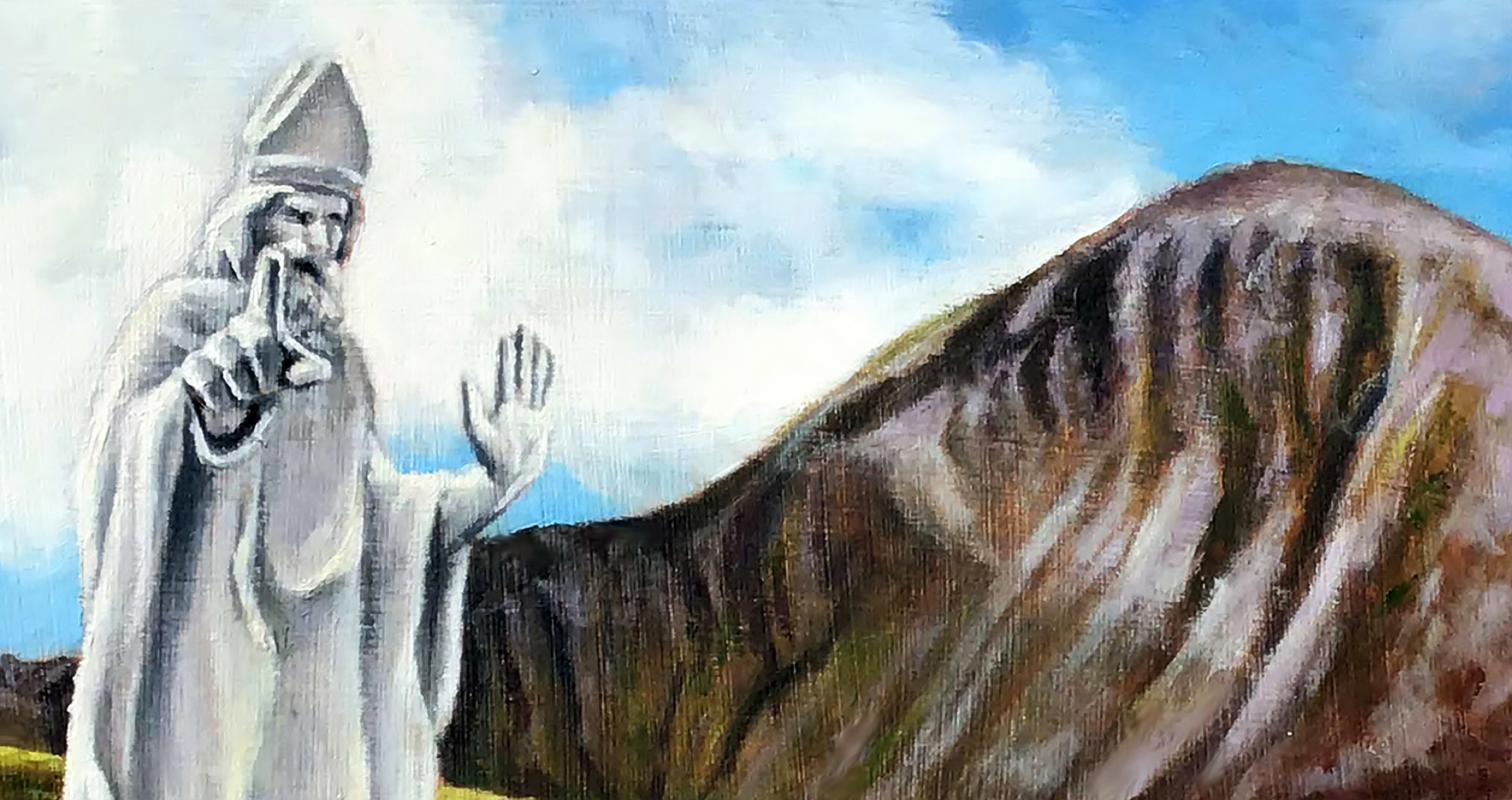 Croagh Patrick meaning Saint Patrick’s Stack or can also be referred to as the ‘Reek’. Is a mountain eight kilometers from Westport in Murrisk, Co Mayo on Ireland’s Atlantic Coast. The distinctively peaked mountain has reputedly been a site of pagan pilgrimage, since 3,000 B.C. It is now a Christian hike associated with Saint Patrick, Ireland’s patron saint. The bringer of Christianity to these shores and banisher of Snakes, supposedly! (For that good deed alone he deserves to be celebrated each and every year).

It is believed that a teenaged Patrick was abducted by Pirates and sold into slavery. Forced to work as a shepherd in the west of Ireland. For six years he toiled before managing to escaping and making his way back his home to the UK. Where he threw himself into the study of Christianity. Traveling to monasteries in England and France, eventually getting himself ordained as a priest. Acting upon a vision he had of receiving a letter

I read the heading: “The Voice of the Irish”. As I began the letter, I imagined in that moment that I heard the voice of those very people who were near the wood of Foclut, which is beside the western sea—and they cried out, as with one voice: “We appeal to you, holy servant boy, to come and walk among us.”

Patrick resolved to return to Ireland and spread the word of god. Which was very decent of him considering they had kidnapped and enslaved him in his youth.

It is said he fasted on the summit of the reek for forty days in the fifth century A.D. No doubt, enjoyed the beautiful view out over clew bay. As a result the last Sunday in July (Reek Sunday) became the traditional day to climb the Mountain. An estimated 40,000 people per year do so. A few brave souls even do it bare foot!.

Over the duration of producing the oil painting I had to change the composition and colour combinations a few time. I discovered that it was over populated and cluttered. As a result I ended up removed one of my figures in order to give the eye’s natural path clearer access to mountain. In order to give the remaining pilgrims more character i decided to contrast there clothes with the surrounding environment.

If St Patrick has taught us anything, it is that on the 17th of March we celebrate not just his legacy but all things Irish. We embrace our shared cultural heritage no matter what corner of the world we find ourselves in. That you don’t have to be born on the Emerald Island to be Irish or to enrich Irish society. Therefore all that you just require is a hard earned appreciation for the outdoors. Allied with a willingness to let bygones be bygones (unless your a snake, then you can feck right off)

Considering out current situation, If you are look for some related fun. like puzzles, spot the difference, word games, trivia or colouring pages. Download my FREE Activity book by signing up for my newsletter below. It’s totally FREE just download and print of the pages that interest you.

Happy St Patrick’s Day where every you are

This site uses Akismet to reduce spam. Learn how your comment data is processed.